Can You Increase Leg Strength With Low Cadence Training?

For decades, cyclists and coaches have been using and prescribing low cadence intervals as a way to increase leg strength and the force they can put into the pedals.  Is low cadence training a tried and trued method that you should add to your training regime or is it a training technique that needs to go the way of the dodo?

The theory behind low cadence training is this: power is equal to force x angular velocity (cadence).  If you want to increase your power, you can either increase your cadence or the amount of force you are applying to the pedals.  By training at a low cadence, 50 rpm or below, riders have to apply more force to ride at the same power.  So, the theory goes, by doing low cadence intervals of 5 to 20 minutes (or even more), the increased force required will be like weight training on the bike.

Now after a thorough web search, I was unable to find any scientific for or against long, low cadence intervals.  It appears to be a subject that scientists haven’t looked at yet.  Instead, what I found was mostly anecdotal, theory based, or you should do it because people have always done it.

But I did find a compelling argument against low cadence training for increasing leg strength.

Long, low cadence intervals just ends up being endurance training since it doesn’t produce enough stress for you muscles, which isn’t necessarily a bad thing.  Long, low cadence intervals do still have some benefits just not increasing leg strength.  For example, it can prepare you for those times you get caught in the wrong gear and can’t afford shifting gears such as short climbs or coming out of a corner at key moments in a race.  They are also helpful for mountain bikers and cyclocross racers were the grade can vary frequently on climbs or in muddy conditions.  And they give you an opportunity to focus on all the phases of your pedal stroke.

But there are still ways to increase your leg strength on the bike if you don’t want to hit the weights.  All you have to do is think like a track cyclist.  Look at their legs and numbers and you know it works.  Like track cyclists, just do shorter intervals at near maximal output.  Here is a pair of low cadence workouts that you can do on the bike to increase your force: 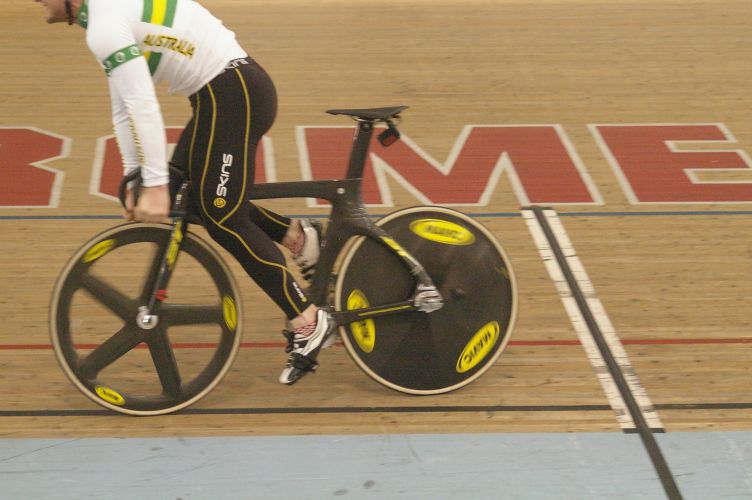 In his book, Racing Weight, Matt Fitzgerald references a New Zealand study in which a group of cyclists was split into two groups.  One group replaced two workouts each week with high-resistance, low-cadence strength intervals while the other group continued to train as they normally did.  All the cyclists performed a 40km time trial before and after the study period.  The group who added strength intervals showed a 7.8% increase in their time trial power output compared to the other group as well as losing a significant amount of body fat.

Fitzgerald doesn’t describe what sort of intervals the cyclists in the study did but he does suggest that cyclists do one set of 6-10 x 20 second power intervals (sprints in their highest gear) or steep hill sprints once per week.  Once again, short intervals at near maximum output.

So it looks like the idea that long, low cadence intervals can be used to increase leg strength is out the window but there are still reasons to occasionally include these intervals in your training.  They come with a high risk of injury so be careful when including them.  But if you still want to increase your leg strength while on the bike, short, low cadence intervals are the answer.  Just keep them short and all out!